Masks and mask making provide ways for children to explore their personal identities and create new ones!

From Kenya to Sri Lanka to Haiti, children reveled in the joy that came from expressing themselves through the mask-making process during our play events. 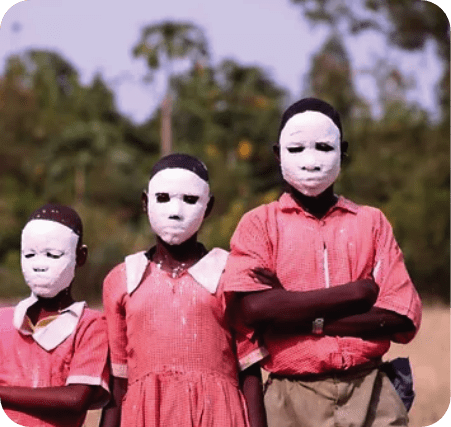 Children in Kenya posing before painting of their marks

Boys in Sri Lanka before painting of masks. 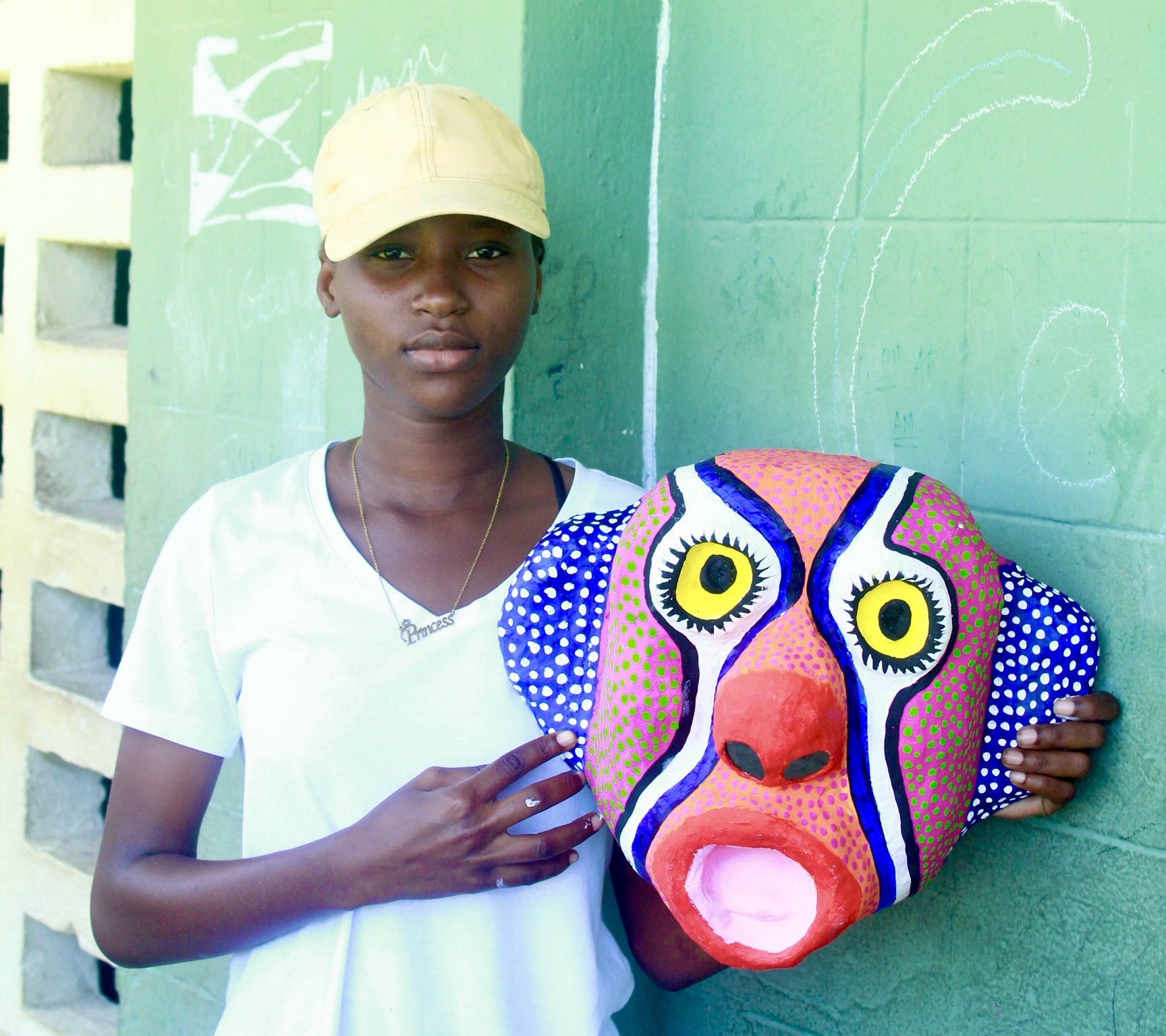 Girl in Haiti with the mask she made during 2022 workshop.

Video of Mask Making Around the World

In Haiti, mask-making is a traditional art-form associated with indigenous ritual practices. Thus, when CPI went to Haiti, we had no intention of teaching kids about masks. They already knew. We hoped, however, they would learn how to make masks from a master – which is what happened. We provided practical support so that, once the kids learned the technique, they could get creative. They might also be inspired to become masters of the artform which, in Haiti, is a viable profession.

In the end, of course, what mattered was that the kids have a good time. Some worked really hard in preparation for Carnival. They practiced perfectionism and some thought of themselves as budding artists. 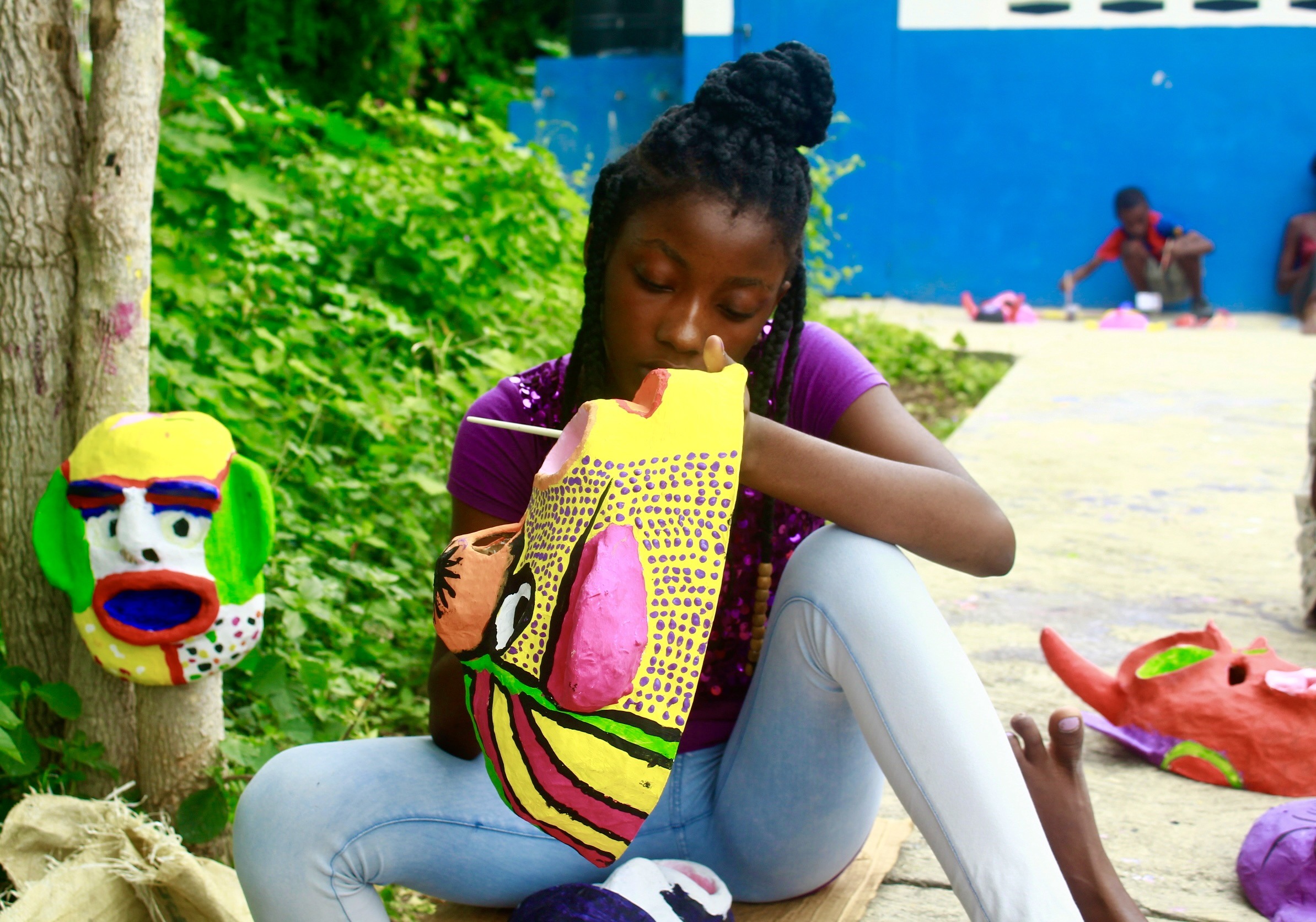 CPI worked with Didier Civil, a widely-exhibited master mask maker. Because master craftsmen in developing countries seek financial support such as that provided by CPI, and because Didier was eager to pass on his skills, Didier was a good fit: CPI provided him means to help preserve Haitian culture, while CPI was able to work with and exceptional teacher.

Through Didier, we hoped to help these kids recover a sense of normalcy after twin crises (a massive 2010 earthquake and subsequent hurricane) had upended their lives. In Haiti, mask-making is normal. For children, it’s a sort of rite de passage and a prominent feature of the culture at large.

Masks are basic to the public celebration of Carnival (an institutionalized form of play, honored in Haitian culture). This is largely due to the importance of voodoo, where masks can represent demons and the dead. Voodoo permeates civic life, despite the country’s Catholicism. Its rites are commonplace 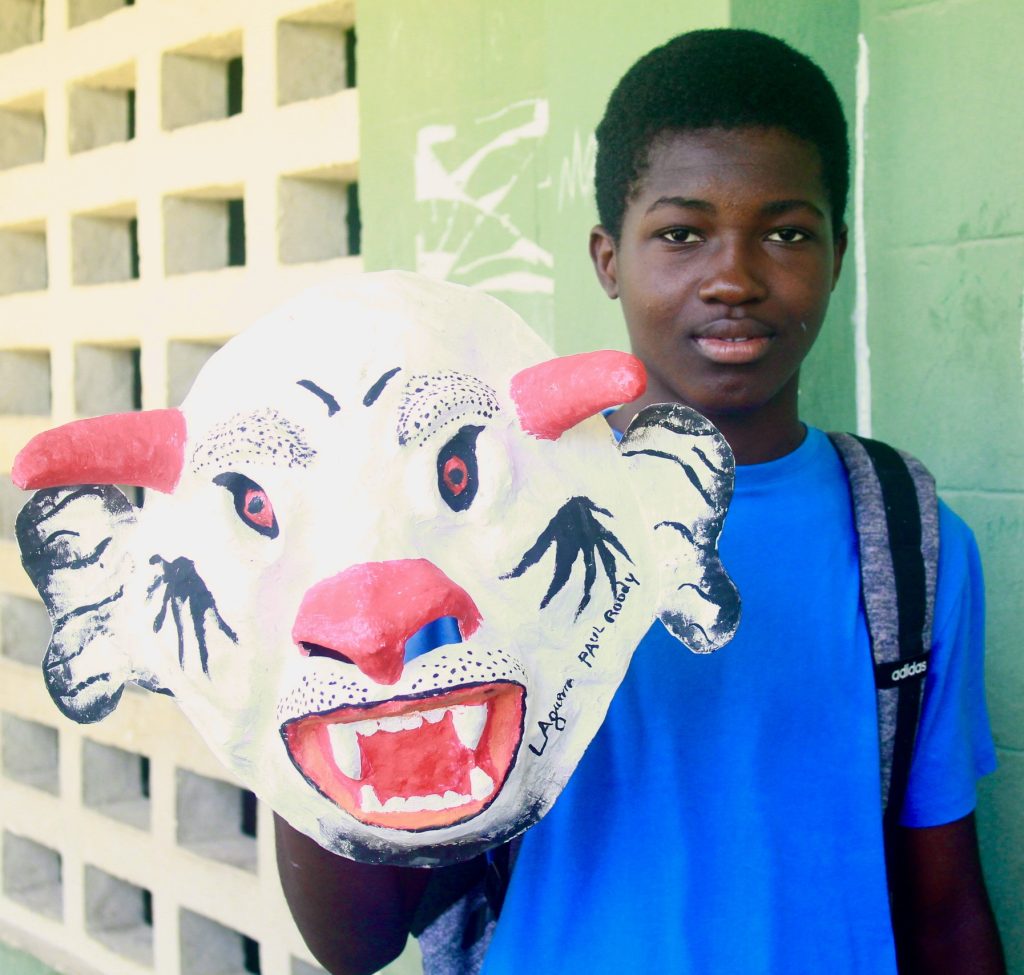 Didier conducted a mask-making workshop in Jacmel, a small city nicknamed “City of Artists.”  It holds one of the country’s most extravagant Carnivals, where art and performance are indistinguishable. The colors are intense. Every inhabitant (all 40,000), it seems, pays attention to costumes and making masks. Paint, sculpture, singing and dancing – old and new – pour into the streets.

The environment is also vivid and preternaturally green. Water is everywhere. It’s the solvent in paper mache.

Actually, the mask-maker’s medium is simple, mainly newspapers, clay, and glue – cheap, accessible materials readily available. Thus, Haitian poverty did not, inexorably, translate into a lack of basic materials. You used what you had; you relied on spontaneous, pick-up ingenuity.

What CPI provided was mainly intangible. We facilitated; we helped create the setting where kids learned their culture in the aftermath of natural disasters. We also sought to document mask-making: its history, the process of making masks, and their use. 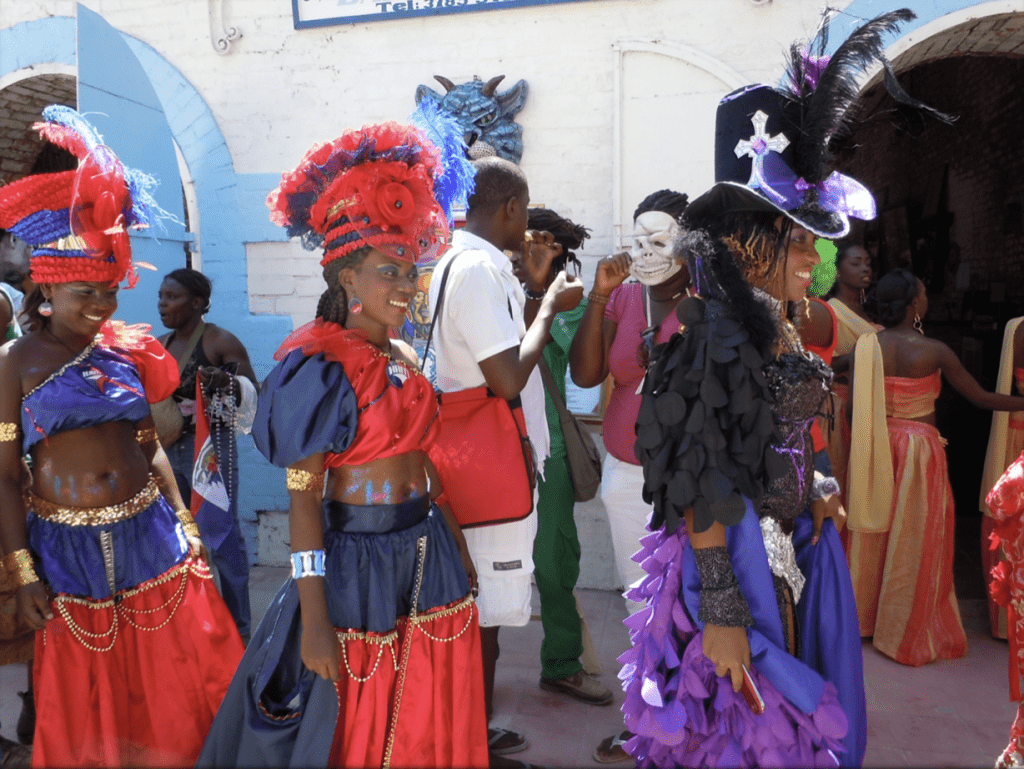 Haitians take immense pride in Carnival, which draws on cultural traditions reflecting a pervasive creativity. Everyone is in on the act. In this sense, Carnival draws on the universal instinct to play, expressed as a public experience encompassing people of all ages.

The actual workshop was conducted outside Didier’s small house, underneath some trees with a group of young helpers.

About 125 children attended, aged about 6 to 15. When Didier provided lengthy, sometimes complicated instructions, the older kids helped the younger ones until everyone could work on their own.

Kids who saw themselves as artists would perform even the minutest operation – like painting a nose – over and over, until it was perfect. In Haiti, it was plausible to want to be an artiste, a little version of Didier who might become a bigger one. Didier conducted a mask-making workshop.

The children also made masks of individual faces. The experience involved a two-way, participatory process where each person put strips of plaster on the other’s face, and then laid gauze on their face. There was an element of trust involved as well, since one’s entire face was covered – you could only breathe by means of straws in your nose that had to be inserted correctly. The kids had to exercise care and display precision. Again, the play was tinged with seriousness – albeit the whole experience was a kind of anticipatory mini-Carnival. Once the masks were painted, they might resemble their makers – in effect, the kids could reproduce their image in a durable object. As we all know, kids’ dolls were until recently invariably white; a black kid could never see their own image in a plaything. But mask-making changed that, so that a kid could recreate their own image (however fantastically) in the mask. They could watch themselves literally create themselves as they might like to be, with a degree of skill sufficient to carry it off.

The experience was hugely affirmative. In acquiring a skill embedded in their culture, the kids perpetuated the culture and enhanced their sense of what they could achieve. They created complex objects that fused them to the culture and still allowed them to express their individuality. In the Haitian context, play became a bridge between the self and history, the self and the world (especially the world of Carnival). Everyone was excited.

When ChildsPlay International records local stories, it ensures that local people are involved and that the methods of recording and transcribing are reproducible at the local level. This involves finding and training local apprentices in skills such as film-making and instructing local teachers to pass on to students’ interest in cultural preservation. Students are encouraged to define their own relationship to oral tradition by creating works of art – paintings, puppets, masks, plays – that interpret that tradition and perpetuate it as a living practice. These works of art are also collected and exhibited, enabling the children to see the direct connection of their own creativity to that of the past.